China’s State Taxation Administration recently released the official announcement (Circular No. 44) regarding the annual Individual Income Tax (IIT) return which concerns every tax resident in China. The tax bureau has emphasized the use of optimized methods in processing taxes including the new personal income tax app that was launched at the end of 2018. This app will now facilitate the tax refund service and will simplify the 2019 annual accounting procedures for all taxpayers.

The online tax app enables taxpayers to receive their additional tax deductions after completing the application process. Furthermore, foreigners can take advantage of its features including tax payment and tax deduction queries. Find out the step-by-step process on how to use the personal income tax app.

On August 31, 2018, the Chinese government passed the new reforms on IIT Law which categorized residents and non-resident individuals for tax purposes. According to the new IIT law, a foreigner becomes a tax resident if he or she resides in China for 183 days or more per tax year (January 1 – December 31). On the other hand, he or she is otherwise treated as a non-resident for staying in China for less than 183 days.

The IIT reform also includes the amendment from the five-year rule to six-year rule for tax residents. The new regulation extends the five-year tax exemption on foreign income to six consecutive years. This means that an individual is exempt from paying non-China source income tax if he or she has been in China for six years. It should be noted, however, that the individual should be outside China for more than 30 days in a single trip during the six-year period.

How to use the online tax app for IIT return

Through the online personal income tax app of China’s State Taxation Administration, individual taxpayers in China were able to claim their additional tax deductions since January 2019. Meanwhile, the tax refund service of the app will be available from March 1st. Taxpayers can take advantage of the service when making tax inquiries or other related tax payments. Below are the steps on registering for the app and checking payments.

1. Download the online tax app by scanning the QR code below (for Android users). Or, you can search 个人所得税 on the Apple Store. 2. Select the city or region where you registered your residence. 3. You have the option to choose which way you want to register. Choose the second option which is face recognition registration. 6. Choose the third option service for your income tax details inquiry under the common business section. 7. Select the tax year and type of personal income. 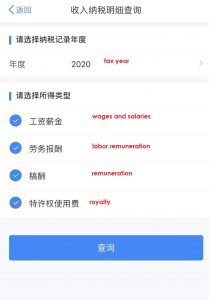 The new personal income tax app also provides a tax deduction declaration platform for the special additional deductions such as children’s education, continuing education, treatment for serious diseases, mortgage interest, rent, and eldercare. Thus, taxpayers will get an instant overview of all tax deductions available to them.

On the other hand, there is no English version of the online app. Therefore, foreigners with limited Chinese language proficiency may still find it difficult to use. Specifically, they may not be able to apply for the annual IIT return smoothly. Hence, it is advisable to authorize a withholding agent such as an accounting firm to do the filing process.

If you want assistance for your annual IIT return, contact our team for inquiries and follow us on social media to get the latest news!